The current commodity boom provides a big opportunity for resource-rich countries in terms of mobilizing additional domestic revenues that could be used for fostering development and transformative growth. However, most countries, particularly in the developing world, have not been able to transform their resource riches for the common good. Why?

“[…] a flood of new hydrocarbon revenues is just starting to hit some of the world’s poorest countries. If there were no resource curse, this would be spectacularly good news – a historically unique opportunity to escape from poverty. Yet the low-income countries that most desperately need money are also the most likely to be struck by the resource curse. Unless something is done, these windfalls will hurt, not help, people who live on the petroleum frontier.” (Ross, 2012: 11).

The commodities boom of the 2000s has bestowed unprecedented resource revenues upon many resource-rich developing countries. A considerable under-discovery of known natural resources combined with increasing investment in exploitation activities, particularly in Sub-Saharan Africa (SSA), could mean a high potential for new findings and more and more developing countries joining the list of natural resource-rich and -exporting countries. But although the export of natural resources and oil in particular poses a big opportunity for a country in terms of mobilizing additional domestic revenue for development and transformative growth, the historical record of most natural resource-rich countries is deeply worrying. Often natural resource dependency is rather a curse than a blessing. Several authors provide empiric evidence that those countries grow more slowly and have more negative development outcomes than their resource-scarce counterparts. Sachs & Warner (1995) can be seen as the pioneers in the field of econometric literature analyzing this phenomenon in their research studies – they initially explored the relation between natural resources and growth, hereby arguing that a dependence on the former negatively affects the latter, leading to natural resource-rich countries growing more slowly than their resource-scarce counterparts. Adding most recent data to their cross-country approach of analyzing this particular relation, the results seem to slightly hold true. 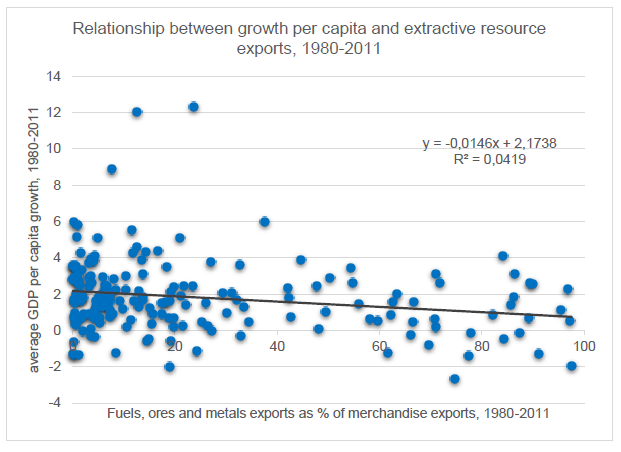 On the one hand, there is a country like Nigeria, where oil revenues per capita increased from 33 US-Dollar in 1965 to 325 US-Dollar in 2000. Paradoxically, income per capita has stagnated at around 110 US-Dollar since its independence in 1960, making Nigeria one of the 15 poorest countries on the planet. In 2000, 70 percent of the population had to survive on less than 1 US-Dollar per day – clearly, the average Nigerian has not profited from its country’s natural resource wealth. Another dramatic example without a doubt is the Republic of Congo: Being one of the most mineral-rich countries in the world, the Republic of Congo received natural resource rents worth nearly eight billion US-Dollar in 2010. With revenues derived from natural resources accounting for up to 86 percent of total government revenues, the country sits at the very bottom of the United Nations Human Development Index (HDI), in fact ranking 187th. Also here, the country and its citizens obviously were not able to enjoy the fruits of their natural resource wealth (van der Ploeg 2010: 2 f.; Sarraf & Jiwanji 2001).

On the other hand, a country like Botswana shows that natural resource dependence can go hand in hand with economic growth and development. Diamonds making up for 40 percent of Botswana’s GDP, the country has the highest growth rates in the world, while at the same time producing a GDP per capita that is at least ten times as high as the one from Nigeria. In this context, also Chile is often named as an example for a country taking advantage of its natural resource riches. By now being a member of the upper middle income class, most recently the country has achieved remarkable annual growth rates of 8.5 percent, while its natural resource sector (and the mining industry in particular) accounted for 64 percent of total merchandise exports in 2010 (van der Ploeg 2010: 2 f.; Sarraf & Jiwanji 2001).

By stating “the [natural resource] curse is not cast in stone”, van der Ploeg (2010: 42) justifiably implies that natural resources could have an impact through several transmission channels, eventually leading to either positive or negative outcomes for development and growth. Of course, at this point the successful management of natural resources relies on home-grown strategies that take into account the given opportunities and address the challenges specific to each country. In the meanwhile there is a broad consensus that governance and institutions matter a great deal for development, especially in resource-rich and resource-dependent economies. Therefore many authors argue that it is of crucial importance whether the country has already good institutions in place once natural resources are discovered. Also, the presence of effective checks and balances restraining the power of the ruling elite seem to be critical to help reverse negative development outcomes of extraction of natural resources. It is thus without a doubt that efforts to mitigate effects of the resource curse depend particularly on policy makers in countries concerned. Given the large amounts of revenues involved, transparency and accountability seem to be key with regard to a proper management of natural resources.