The concentration of greenhouse gases in the atmosphere has risen sharply since the beginning of the industrialization. Because of burning fossil fuels especially the energy sector has contributed to global warming and thus climate change. 2015 could now be a landmark year, as the international community of states is hoping to agree on a new climate deal. And in order to achieve urgently needed cuts in emissions, there is no way around the energy sector. 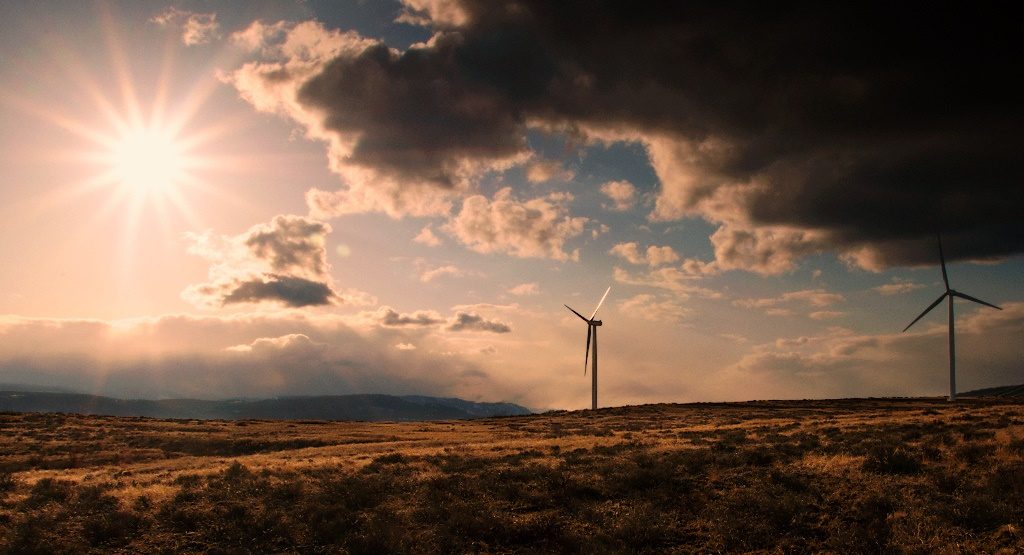 Later this year in December, Paris will be stage for what is called COP21 – the 21st Session of the Conference of the Parties to the United Nations Framework Convention on Climate Change (UNFCC).

With the objective of achieving a legally binding and universal agreement on climate protection involving all 196 member countries, the event hosted in the French capital is seen as a potential major milestone. Clearly, expectations are high, but so are the risks of hyping the gathering of governments aiming to keep global warming below 2°C – we all remember the fiasco of Copenhagen in 2009 (COP15), where there couldn’t be agreed a successor agreement for the Kyoto Protocol. Nonetheless, the momentum climate change has seems promising.

Just a few days ago, Ban Ki-moon said in the course of the 17th World Meteorological Congress in Geneva: “This year governments will make major decisions on sustainable development and climate change. 2015 must be a time for global action.” Urging scientists to speak out on climate change on the road to Paris in order to illustrate the stakes involved, the Secretary-General of the United Nations (UN) is one of several – in part historic – encouraging signs these days. Whether it is the joint announcement by the United States and China on new limits on greenhouse gas (GHG) emissions, the Pope and his “Laudato Si” encyclical devoted solely to environmental issues, or the G7’s recent commitment to decarbonize the global economy – climate change is high on the agenda currently.

Now the International Energy Agency (IEA) released its new World Energy Outlook as a special report on energy and climate change. Established by industrialized countries one year after the first oil crisis in 1973, the IEA for the longest time has been seen as a professional – quite often lobbyist – organization consulting and publishing with regards to energy security based on fossil fuels. Now its newest report comes in as a bombshell – in a time, where nearly every politician, scientist and activist emphasizes that we are the last generation to successfully fight climate change.

Referring to older analyses that have repeatedly shown that the cost and difficulty of mitigating GHG emissions increases every year, the IEA starts it 200-page report by stating that time is of the essence. And with production and use of energy accounting for two thirds of the world’s GHG emissions, this sector has to play a critical role in the fight against climate change. Deep cuts in these emissions have to be accompanied by sustained economic growth, boosted energy security as well as guaranteed access to sustainable energy for particularly the poorest on the planet. And such pledges are not only urgently needed, they also make economic sense.

Since last year we can witness a development that hasn’t been possible for 40 years – the decoupling of economic growth and energy-related emissions. In 2014, the global economy grew by 3 percent, while CO2 emissions stayed flat. On the one hand there is a rapid expansion of low-carbon energy sources. Renewables, such as wind, solar and hydro, accounted for nearly half of new power generation capacities, with China leading the way, followed by the United States, Japan and Germany. On the other hand energy efficiency is on the rise, too, which accompanied by structural changes in several economies led to an average drop of 2.3 percent in energy intensity worldwide. 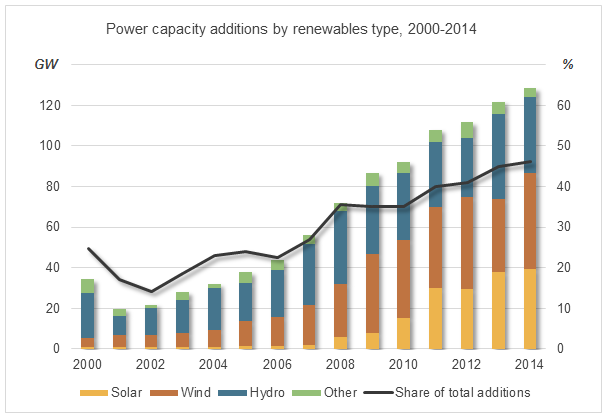 Another important pillar for the energy sector to be able to contribute to tackling climate change is putting a price on carbon. According to IEA estimates, around 11 percent of global energy-related CO2 emissions arise in areas that operate a carbon market (I’ve already dealt with emission trading schemes in another article). Unfortunately this is in stark contrast to 13 percent of emissions that arise in countries where governments are paying subsidies on fossil fuels. 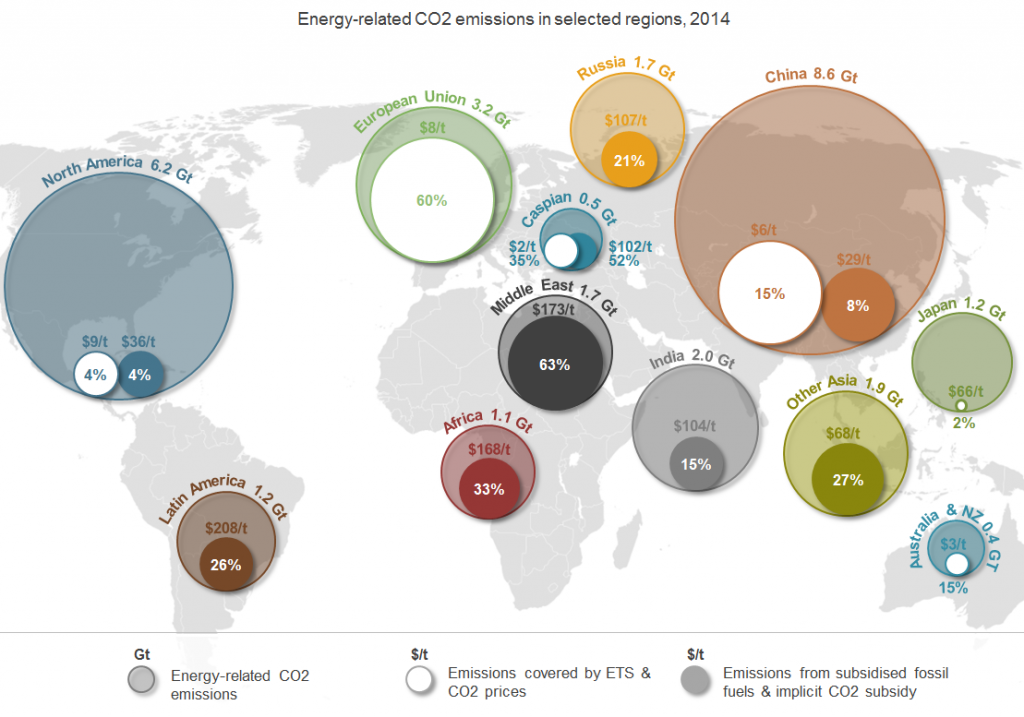 Against the background of these developments, the IEA argues that in order to keep the rise in average temperature below 2°C compared to pre-industrial levels, a peak in global energy-related emissions needs to be accomplished by 2020. In its “Bridge Scenario” the scientists are confident that this peak can be achieved relying solely on proven technologies and policies, without changing economic and development prospects of any region. And clearly, a commitment to target such a near-term peak would send a clear message of political determination to fight climate change before it’s too late.

Five measures would be essential in order to reach the near-term peak by 2020:

In the run-up to COP21 and its preparation, countries have agreed to publicly outline what post-2020 climate actions they intend to take under a new international agreement, known as their Intended Nationally Determined Contributions (INDCs). The IEA hopes that these form the basis for what they call a “virtuous circle” of rising ambition, with the five measures mentioned above serving as areas of strategic orientation. Of course, in this context one needs to consider individual responsibilities and prevailing circumstances.

A basic requirement for the climate conference to be a success will be the self-initiative of participating countries. Rather than centrally setting global limits on emissions and then trying to get member states to comply, Paris will rely on countries to come up with their own plans and then encouraging them to be more ambitious. This will place the onus on governments, businesses as well as civil society to develop practical low-carbon solutions, rather than trying to pressure others into doing more.

Also checks and balances are of fundamental importance in order to eventually guarantee the transition to a low-carbon energy sector with clean technologies. This is why the IEA also recommends having a five-year-revision plan in place, regularly reviewing contributions, as well as the establishment of an effective process for tracking achievements, particularly in the energy sector.

The answer to the question if 2015 will be the year in which state elites take much-needed collective steps in order to tackle climate change cannot yet be known. As big as the challenges present themselves, there is also a big opportunity to create a credible long-term vision of how to respond to probably the biggest threat to the planet – as the IEA puts it: “The world must quickly learn to live within its means if this generation is to pass it on to the next with a clear conscience.”