The importance of soil for sustainable development

Soil and land, whether it is biomass in the form of food, feed, bioenergy, or biomaterials, play a crucial role in today’s life and underpin global efforts towards sustainable development. Such natural resources are key components for the fight against poverty, hunger and climate change. Now new studies presented at the 3rd Global Soil Week in Berlin analyzed the Sustainable Development Goals and how they imply emphasis on increased production and consumption of soil and land resources – and why this is everything but sustainable. 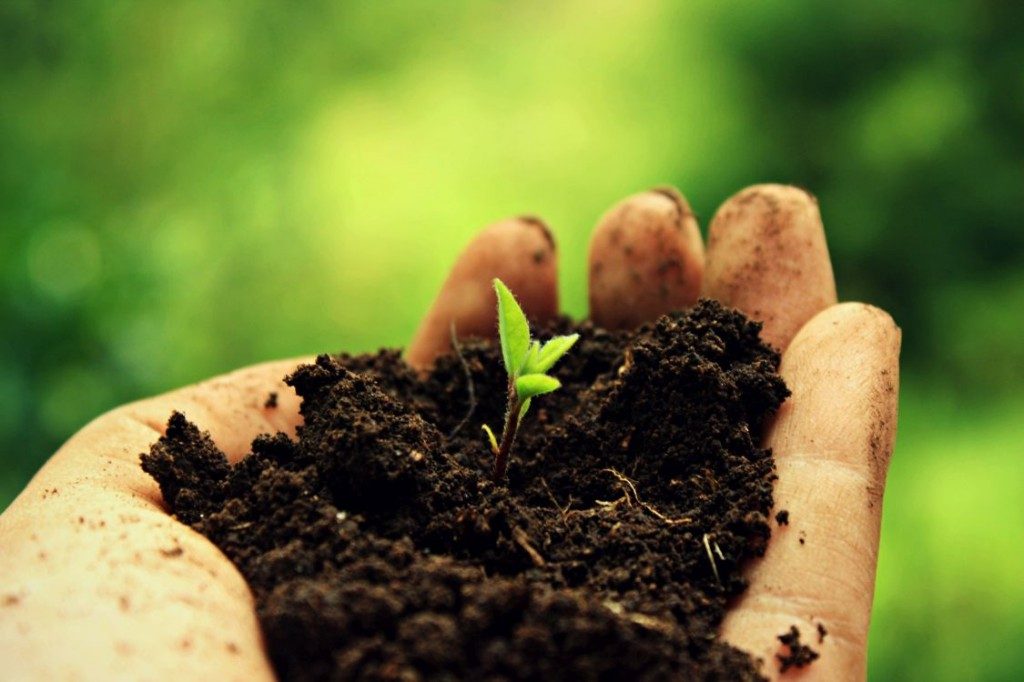 Later this year in September, New York will be stage for introducing what is called the Post-2015 development agenda. The United Nations (UN) will launch a set of Sustainable Development Goals (SDGs) that build upon the Millennium Development Goals (MDGs) until 2030. The fundamental novelty here? SDGs are envisioned to be universal, placing both developed and developing countries under obligation –  from fighting poverty, to guaranteeing food security, gender equality, access to water & energy, as well as tackling climate change and building global partnerships.

Back in January 2013, an Open Working Group composed of representatives of selected UN member states was established in order to discuss a potential framework agreement. One and a half years later after several formal sessions an outcome document with 17 potential SDGs and 169 accompanying targets has been released. Especially soil and land matter in this context, with the lion share of the SDGs directly relating to the use of such natural resources.

This is hardly a surprise, given that fact that soil serves as a basis for more than 95% of global food production, with more than one third of world land area dedicated to agriculture. With that comes dependence of many agricultural workers, particularly of small-scale farmers in developing countries in the global south. Furthermore soil serves as the largest carbon sink on earth, and is host to an immense pool of biodiversity. Biomass is also increasingly used for non-food purposes, such as the combustion of biomass-derived biofuels (e.g. biogas or bioethanol) or as an input in the chemical and pharmaceutical sectors. Clearly, the protection of soil and land is key to solving a wide range of today’s environmental, social and economic problems – and with that ensuring sustainable development. Against this background it is no wonder that the 68th UN General Assembly declared 2015 the International Year of Soils.

However current developments are extremely alarming and everything but sustainable: 24% of the world’s land area is affected by degradation. Every year 24 billion tons of land is lost due to wind and water erosion, construction activities, compaction, resource extraction or exhaustive cultivation, through this impacting 1.5 billion people globally. These factors, accompanied by population growth, increasing average income and changing dietary patterns, led to the fact that cropland per capita has fallen by more than half since 1960. And this goes hand in hand with a fundamental distribution problem: The average European needs 4.7 hectares per year – or two football pitches – to please his or her needs with regard to food and other soil products. That is about seven times more than is available to the average person in a developing country (see Fig. 1). Almost 60 percent of the area consumed by Europeans lies outside the European Union, a phenomena in which context it is often referred to as “land grabbing”.* 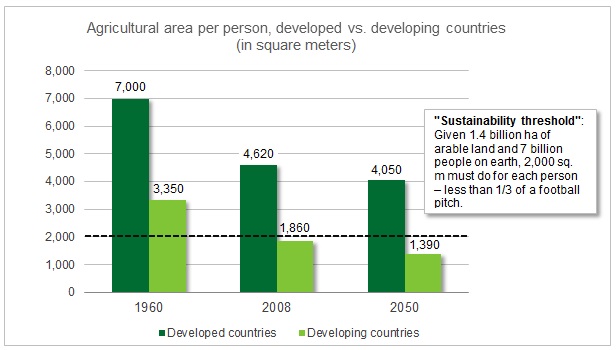 Now new research presented at the 3rd Global Soil Week last week in Berlin analyzed the effectiveness and sustainability of the proposed 17 SDGs with regard to the enormous and steadily growing demand for resources such as land and biomass. Both the Institute for Advanced Sustainability Studies (IASS), UNEP’s International Resource Panel (IRP) and the International Institute for Applied Systems Analysis (IIASA) in their two studies conclude that demand for land – implicit in the individual SDGs – will affect the future availability of land and thereby potentially impede the achievement of the goals. In other words: we simply won’t be able to meet our land demand.**

“The competition for resources concerns all 17 of the SDGs”, warned Michael Obersteiner, Program Director of Ecosystem Services and Management at IIASA. “Only a systems approach can help to reveal critical interdependencies and avoid zero-sum outcomes as nations craft policies to implement the goals.”

In fact, twelve of the proposed SDGs are underpinned by the use of natural resources, some of which directly relate to requiring additional land resources, such as the goals on food security (SDG 2), energy supply (SDG 7), production and consumption (SDG 12) and the use of ecosystems (SDG 15). IASS researchers predict that demand for biomass and corresponding land is going to expand significantly under business as usual (BAU) conditions until 2050. In view of global megatrends it is particularly global supply of food and bioenergy that will need additional land resources (see Fig. 2).*** 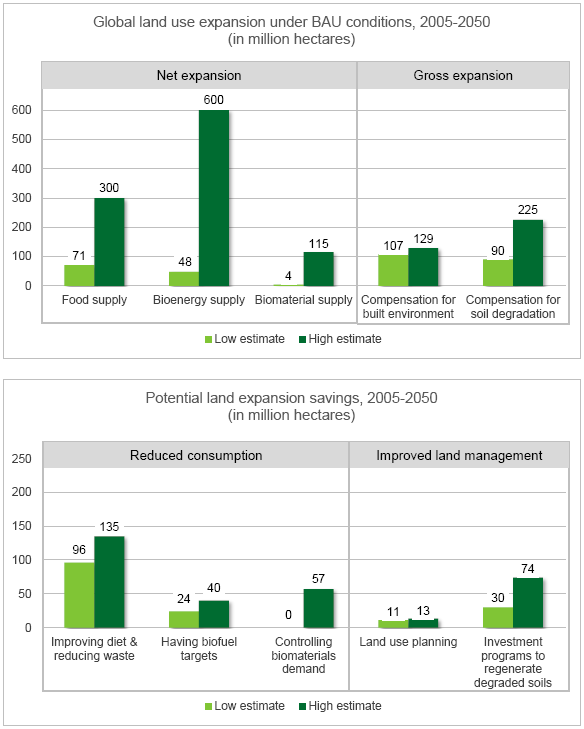 In order to avoid that progress on some goals limits or challenges the achievement of others, an integrated approach (so-called “land-water-food nexus”) is needed that considers and analyses the combined impacts on soil and land resources. Hereby both the demand and supply side offer some adjusting screws that potentially could save land expansion (see Fig. 3). It goes without saying that such an approach will only be effective when participatory governance instruments, as well as monitoring and accountability mechanisms are in place. Like this national government responsibilities and obligations with regard to soil and land use can be justified and actors can be held accountable. Also people are empowered to articulate their priorities through multi-stakeholder initiatives, which is of fundamental importance to address the needs of the poorest and most vulnerable groups.

IRP member and formerly co-chair Ernst Ulrich von Weizsäcker points to a fundamental discrepancy: “It is only natural that the ecological targets in the SDGs come up against brick walls, while the social and economic goals strive for more and more growth. It’s a huge conflict and thus a problem of distribution: our planet’s resources are finite, so the rich need to give away some of their wealth. Otherwise the current inequities will remain.”

Clearly, the results of the two studies highlight the fact that business as usual is definitely no longer an option. We need to change the way how and in which dimensions we manage and use the natural resources at our disposal and move towards more sustainable production and consumption patterns. Otherwise we will reach the limits of ecologically sustainable land use quicker than we would like to, since soil is every bit as non-renewable as oil. The Post-2015 development agenda and the SDGs respectively are a great opportunity to sound the bell for global change.

*In 2012 under the direction of the Committee on World Food Security, countries adopted global guidelines on tenture of land, forests and fisheries, aiming to safeguard responsible agricultural investments.

**Knowing about methodological difficulties and the lack of accuracy when it comes to land projections, authors from the IASS note to following assumptions: “Projections of future land demand for biomass production predominantly rely on two different approaches: Firstly, they quantify the general equilibrium of a particular form of biomass production and consumption. Land use scenarios related to these demand/supply models make assumptions about the future biomass demand and the factors that influence whether this demand can be met by supply, such as yield gains, availability of irrigated land, irrigation efficiency, cropping intensity, soil fertility and/or degradation, land conversion (e.g. urbanization, infrastructure). Secondly, an evolutionary approach is applied that projects the future availability of arable land, using estimates about current land use and building on current trends. […] All models make assumptions about global and regional agricultural and societal developments to estimate future land use.” Please refer to the study for more detail.

***For instance according to the Food and Agriculture Organization of the United Nations (FAO) global food and feed production needs to increase by 70 per cent by the year 2050 in order to feed the world’s rapidly growing population. And the International Energy Agency (IEA) is estimating a trebling of biofuel consumption by 2040.